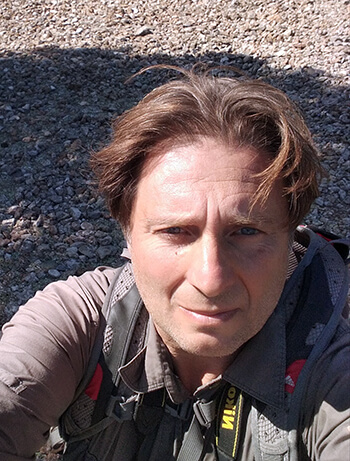 Born in Samos, in 1966, he graduated from the Arsakeion Peadagogical Academy and the National Kapodistrian University of Athens. He completed his MPhil and PhD at the University of Cambridge, undertaking a comparative research on diachronic spatial organisation and corresponding socioeconomic structures and functions in the mountainous landscapes of Crete, Ikaria and Epirus.

From 2002 to 2017, he served as an archaeologist at the Archaeological Service in East Attica. He conducted rescue excavations and surveys in the areas of Marathon, Thorikos, Lavrion, Sounion and in islands of the Argosaronic gulf. He participated in interdisciplinary research programs in Attica and in the Ionian Archipelagos. He directed the Ari archaeological survey project in East Attica, in collaboration with Rühr-Bochum University.

His research interest focuses on the systematic, interdisciplinary study of the historical landscape at East Attica and the Ionian Islands, as well as on the development of a unified approach to past societies, combining research tools of Archaeology, Ethnography - Ethnoarcheology and History.